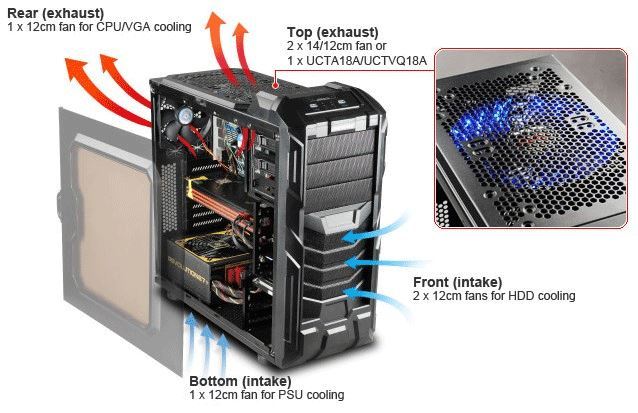 Housing cooling – the way to the silent system

Your new PC shouldn’t make any annoying noises while gaming or working. These noises can be due to excessive heat or a bad fan therefore you should take a closer look at the case cooling before buying.

Even if you are not bothered by fan noise, it is important when assembling a PC that the cooling system used is optimally matched to the performance.

Why is there a cooling system in the case at all ?

Every newly acquired standard computer already has a cooling system, which is mainly based on fans and heat-dissipating materials. The integrated coolers are well matched to the respective PC system and usually cool the processor and graphics cards reliably. With preconfigured computers, you don’t usually have to worry about possible overheating of the processor.

However, many entry-level PCs are increasingly using very inexpensive coolers. The disadvantage of such cooling systems is a disturbing noise development. Even at very high ambient temperatures, problems can arise with inexpensive coolers. So if you are very bothered by the noise of your fan, you can consider buying a quieter model.

It could happen that an already installed cooler is no longer sufficient to reliably cool the modified system. If more powerful devices are installed, this increases the heat development.

Is your case overheating?

The processor should not exceed 50 degrees if possible. But how do you find out whether components inside the housing are overheated?

In the worst case, the PC switches off automatically if it overheats, and the most recently used data could be lost. So that this does not occur, certain programs allow you to view the current temperature.

With tools like HWMonitor or MSI Afterburner you can monitor the temperatures of the processor, the graphics card, the hard drives and motherboard.

It is best to measure the temperature in different application scenarios. Such an analysis can provide information about whether and which case cooling is required.

What to consider before buying

In order to even know which cooler you can use for your case, you first have to know the form factor of your case. Once you have identified this, you should check how much space your computer case offers or how many connections it provides for cooling systems.

Fans can in fact be quite large and may not fit into all case types. Common sizes of case fans are 120mm or 140mm (diameter of the rotors). T

The assembly of the fan is also important. With larger fans, it may sometimes be necessary to remove the entire mainboard. Cooling performance should always be matched to the system performance

At best, a powerful fan should reach a speed of up to 2,000 rpm in order to reliably cool your system even during extended gaming sessions.

Furthermore, one should pay attention to the TDP value (thermal power loss) of the processor specified by the manufacturer.

The most important thing is that the cooling performance of the respective hardware is appropriate and that there is compatibility between the CPU / mainboard and the cooling system. By installing fans at different points in the housing, you can influence the airflow in a targeted manner.
Powerful computers also need powerful cooling systems, whereas simple office PCs are usually more frugal when it comes to cooling.

How to make your loud PC quiet:
Silent systems – quiet as a mouse, yet powerful

Fans are already preinstalled in many housings – but only in the rarest of cases do they meet the requirements of a silent system. The fans are often quite loud, especially in inexpensive entry-level cases.

Before making a purchase, it is worth taking a closer look at the data sheet of the built-in fans. The maximum noise development is specified here in decibels . The fan noise is made up of the engine noise and the flow noise of the air. The flow noise of the air is largely determined by the speed of the fan. At a speed of less than 400 revolutions, the fan is as good as inaudible when the housing is closed.

Full capacity utilization is not always necessary though in gaming and resource-intensive applications usually there is. Therefore, reducing the speed is more of an option for systems that are not geared towards maximum performance.

If your housing is not insulated at the factory , you can retrofit it relatively easily using so-called insulation sets to reduce noise. This is done with self-adhesive (and usually already cut to size) insulating mats, which are attached to the inside of the housing according to the instructions.

The standard way to cool PC hardware is to use air to cool the case. This happens in a similar way to a fan: the rotating fan blows cooling air to the corresponding component.

With fans, it is important to pay attention to how large the diameter and how fast the speeds are. However, as the speed increases, so does the noise level of the fan. Therefore, fans are recommended that can adapt to the heat development.

If little power is required, the fan does not rotate at all or only rotates slowly; if the computing power increases, the rotation speed also increases automatically.

This reduces annoying noises and lowers electricity costs. So-called heat pipes (heat pipes made of copper) help to conduct the generated heat away from the most important internal components such as the mainboard and thereby specifically release this waste heat into the housing fans.

These heat pipes are preferably present in air cooling. In water cooling, on the other hand, so-called circulation pumps are required, which force the water into a circuit so that the heat can be transported away.

With water cooling, the heat is dissipated from the processor / mainboard through a water cycle . The dissipated heat is cooled down by a heat sink and finally pumped back to the processor in the circulatory system for cooling.

The water cooling is considered to be particularly quiet and powerful. It’s popular with gamers, but it comes at a price. It should be said, however, that the cheaper water cooling systems can also generate noises under certain conditions (e.g. due to vibrations inside the housing). In addition, most models have to be serviced at certain intervals.

The right choice of case cooling is very important if you want to assemble your own computer. You should try to balance between cooling performance and noise when buying a new cooling system value. If you don’t mind these noises too much, you can also look for cheaper models that are compatible with the respective system.

Completely passive cooling systems are increasingly being used in slim notebooks. If you want completely silent operation, you should carefully choose the components for the Silent System and follow the manufacturer’s instructions.