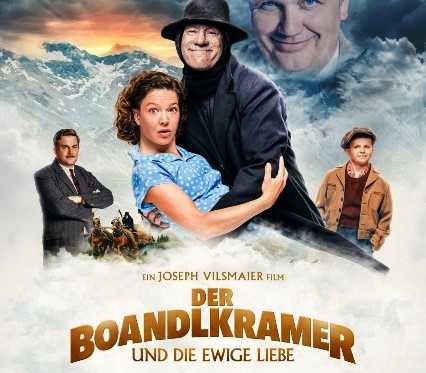 Michael “Bully” Herbig has fallen in love with death. Or at least in its Bavarian personification. When Joseph Vilsmaier filmed Franz von Kobell’s classic story by Brandner Kaspar in 2008, Herbig played Boandlkramer, who lets himself be ripped off for eternal life while playing cards.

The role has evidently grown so dear to him that he suggested the sequel “The Boandlkramer and Eternal Love”. In this new film, love is literally stronger than death, because when the Boandlkramer sees young Gefi on the deathbed of her little boy, he suddenly becomes weak – which of course, in view of the dearest Hannah Herzsprung, who plays this Gefi, will not surprise anyone. Love is just a heavenly powerthat has already thwarted the divine plan.

Because his heart beats so hard for Gefi, the Boandlkramer does not take away her son – job from the top or not – and instead smuggles Hallodri Gumberger into paradise, which he should have delivered in hell. The dizziness doesn’t bother the devil in the least. On the contrary, he advises death: “Take your life in hand!” Because he knows that if the Boandlkramer follows the Gefi instead of going about his work, the world will quickly sink into chaos.

By the way, hell is a diabolical dance palace here with sinfully seductive show girls, the sky, on the other hand, is very ornate baroque church splendor, and the earth in between is rural post-war Bavaria, where people are waiting for returnees from Russian captivity. The Gefi, for example, on her Anderl, although the mayor’s son Toni has long since been a new admirer. Joseph Vilsmaier staged this village cosmos of creaking chambers, beer-haze-fogged taverns, excursions into the majestic mountains of the Alps as well as one or the other steam locomotive with a lot of devotion to the imagery of the local film. This closes the circle with his first film as a director – “Herbstmilch”.

Vilsmaier’s last film is also a kind of comedian summit. Hape Kerkeling, for example, plays the devil with a blonde lard as a fat-friendly entertainer. Eisi Gulp is also there as a bad-tempered archangel. Rick Kavanian is sitting at the Heavenly Gate and the ground staff includes a rumbling Sigi Zimmigart as village mayor. And of course Bully Herbig, who, as Boandlkramer, gets flirting tips from Gumberger, who owes him a favor: Sebastian Bezzel¸, known from the Rita Falk crime films, plays the parade stenz with a lot of self-irony and Strizzi-Schnauzer and recommends someone who is looking for advice more casual look.

Admittedly without any resounding success. The Boandlkramer exchanges his rags for high-water trousers, baggy tailcoats and pot cuts and thus transforms himself into Beppo, a kind of Karl Valentin figure on free feet, in order to make violent advances. With nasal Bavarian official, Herbig gives a death of left-wing amiability that arouses less fear than pity. You have to like him – like the whole film including the melancholy happy ending that Herbig and his co-authors Marcus H. Rosenmüller and Uli Limmer wrote into the script that won the Bavarian film award.

With the help of the Gumberger and a divine miracle, the Boandlkramer brings her Anderl back. He himself renounces his love. And when he says goodbye to her as Beppo and she says, “Maybe we’ll see each other again”, he replies – then all of death again: “Definitely!” “Brandner Kaspar” was about the question of how one can cheat death. When filming “Der Boandlkramer and Eternal Love”, Joseph Vilsmaier was already terminally ill. No more escape possible. That the director fell in love with death would be too daring to say, but his latest film at least seems to embrace him. Remarkable.